One of our favorite traditions is sneaking away for birthday weekends.  Since we’re off to San Diego this weekend to celebrate Tate’s 36th I figured it was a great time to talk about our NYC jaunt a few years back….

One of our favorite traditions is sneaking away for birthday weekends.  Since we’re off to San Diego this weekend to celebrate Tate’s 36th I figured it was a great time to talk about our NYC jaunt a few years back….

48 hours in New York rivaled 50 hours in Vegas (a tale for another time). Regardless of the fact the flight was half as long, the city was equally as exhausting.

I guess I should back up and explain that this great big, exhilarating, New York weekend was my birthday gift. Yea. You heard that right. Because I’m not spoiled or anything.

A few weeks earlier that sneaky fella of mine sent me an airline confirmation. 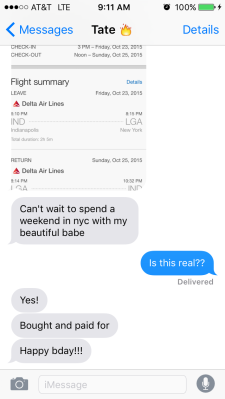 Having never been to the BIG CITY (yea yea – insert gasp here, I am used to it) I had no clue what to expect. Of course, everyone passed along their long lists of Must See’s and Must Eat’s and Must Drink’s and Must Avoids, but we pretty much decided to go into it with an open agenda. 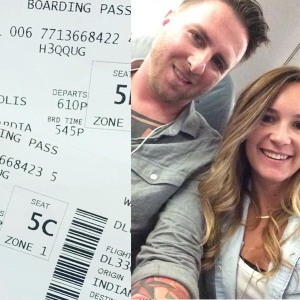 The taxi ride from LaGuardia to the W Hotel may have been the most tortuous ride of my life. Tate decided to book our hotel in Times Square so we were in a central location to everything… which was fantastic, but also terrible, because Times Square is… well terrible, as I quickly learned. The concept of traffic flow (both by foot and automobile) seems lost on everyone there.

As soon as we got checked into our room on the 36th floor, we were back out the revolving door, in search of food. Thus began our first leisurely stroll (and by leisurely I mean, block after block after block), where we stumbled upon a little Argentinian place in Chelsea (how fitting). By the time we walked in the door, I was less than pleasant, and an eleven on the hangry scale. They immediately brought me my wine and a basket of bread and all was right in the world again.

Porteno did not disappoint, and I would highly recommend it to anyone who asks. But then again, they brought us complimentary wine after our meal too so I may be biased.

Can I pause for a second and ask if there is an over-abundance of Irish in New York, or if every other bar genre just threw in the towel and added a ‘Mc’ in front of their name and Guinness to their tap line?

After a few drinks at one of the local Mc’watering Holes, we decided we better call it a night, and trekked back to the hotel. Saturday took us to the 9/11 Memorial and museum (a sombering experience, but I somehow managed NOT to cry, so there’s a miracle),

When we left the museum we made a pact not to spend the rest of the day dipping into depression, and proceeded to wander around the city and saw EVERY OTHER THING THERE IS TO SEE IN NEW YORK CITY. No really. I think at the end of the day we had logged like 20 some miles. Thank god, for once in my life, I heeded advice and wore practical(ish) shoes.

And then I did what any sane female would do. Dawned 4″ heels for a Broadway show that night. What doesn’t kill you only makes you stronger, no? That’s what I kept telling myself as we climbed the stairs to our balcony level seats. (We saw An American in Paris )

Guess where we went after the show — yep, another Irish pub. Shocking, huh? I told Tate we had to get drunk and find a trashy New York pizza joint for a night cap (hey, you’re only young once) so we did just that. Lucky for us, the one I picked had a cocaine dealer out front, so we had prime entertainment for the 14 minutes it took us to scarf down the most delicious thin crust pizza and down a few bottles of water.

Sunday morning it poured, which was perfect because we wanted to do nothing but sleep. We finally managed to get up and showered shortly before checking out of the hotel at noon. Leaving our bags behind we headed back to Chelsea for brunch (Tipsy Parson — GO! So good), wandered the High Line, hit up Chelsea Market, then were off to Central Park and the last leg of our whirlwind see-it-all-do-it-all Manhattan madness.

As late afternoon rolled around and we hopped into the taxi to head back to LGA, I closed my eyes and sank into the seat. I had achy legs, and a happy heart. It’s not that I haven’t traveled to a hundred cities, it was more-so who I was traveling with.

New York City wasn’t what I expected it to be. I anticipated huge, bustling, high action… it was big, and it was busy… but it wasn’t unmanageable. I anticipated overwhelming, but we conquered it easily. Guess that just proves you never know til you try 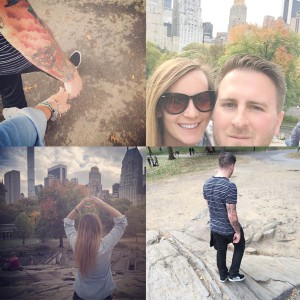